Hades is an ornate handgun issued to Train Heartnet as the 13th member of the Chronos Numbers. It is entirely made of Orichalcum, the strongest metal on earth.

Train's gun is a six-shot double-action revolver with gold engraving on its grip and barrel. The frame has a triangular attachment that bears the Roman numeral XIII on both sides. It possess a rapid-fire trigger for quick shooting.

Hades is a top-break revolver, meaning it is reloaded by "breaking" the pistol in half, exposing the rear of the cylinder. This automatically ejects all cartridges inserted and allows the user to drop in fresh ones.

A unique feature of the gun is a five-meter-long retractable wire leash inserted in the grip.

As an expert marksman's firearm, Hades fires much more rapidly than ordinary pistols and is capable of unerring accuracy. For instance, Train can shoot several bullets through a single hole.

Being made of super-tough orichalcum, Train can use his revolver as an effective melee weapon, bashing enemies with lightning speed. He is also capable of blocking melee weapons and even bullets with it.

Train's mastery of this gun is evident from his ability to fend off both long-range and close-range attacks, as well as to swiftly assassinate his targets during his Chronos years.

Hades can chamber different types of cartridges, including ordinary handgun bullets, tranquilizer bullets, and most of all, specialized bullets developed by Sven and other makers. Examples are:

The retractable lanyard wire attached to the gun gives Train a number of advantages:

(Note: this appears only in the manga)

When Train's body becomes infected with nanomachines, he manages to manipulate them to create static electricity. The gun's orichalcum acts as a catalyst for the nanomachines. This lets him focus electricity into the barrel of Hades, turning it into a railgun.

With this power, Train is able to defeat the toughest of opponents, including his rival Creed. However, Train is only able to fire four railgun shots a day, due to the energy consumption it takes to create the electricity.

Hades appears to be a combination of a revolver and an automatic pistol, judging from the shape of the barrel. This is apparent since the gun uses short auto-pistol cartridges instead of long revolver casings.

The gun may have been based on the S&W Schofield Model 3, one of the first top-break revolvers made.

It could also have been influenced by another top-break gun, the revolver of Vash the Stampede from the anime/manga series Trigun.

Sephiria gave Train this gun inside a ceremonial box when he was first accepted as a Chronos Number. Train utilized it as his primary weapon ever since. 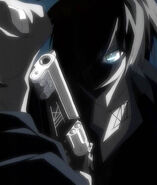 Train aiming his gun at Eve

Saya giving Hades back to Train