Excelion appears as a simple glove with visible strings on the fingers. A golden design rests on top of it with Jenos' roman number inside it.

Excelion is a glove with indestructible Orichalcon wires attached to each finger, which Jenos uses to tightly grasp or lacerate his opponents. Jenos releases steel wires out from the fingertips and manipulates them at will. Those wires can cut various hard objects such as rocks and bullets. He can also manipulate them with enough skill to pick objects up without cutting them. Using Excelion requires great skill, and no one, but Jenos, can use it properly.

Excelion was given to Jenos after his induction into the Chrono Numbers. 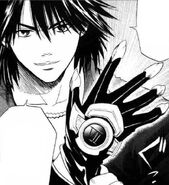 A full view of Excelion in the manga.

Close-up of Excelion.
Community content is available under CC-BY-SA unless otherwise noted.
Advertisement