Christ is a giant saber, with a golden handle. Like the rest of the Time guardians' weapons, it has its user's number engraved on it.

Sephiria Arks sword, Christ, is completely made out of Orihalcum, so it might as well be indestructible, as well as being strong and sharp enough to cut through almost everything. Sephiria can put up a good fight with her weapon, even against a super-enhanced Creed Diskenth, only losing because of her opponent's drastic artificial changes in his body.

Christ was given to Sephiria after she became Number I. 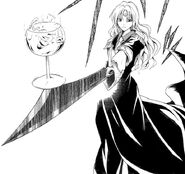