Welcome to the Black Cat Wiki!
Your online source for all information on the manga and anime, Black Cat.
This wiki already contains 15,388 number of edits and a total of 466 articles since its creation on May 18, 2009‎.
» Please do be aware that UNMARKED SPOILERS lie within! «
Rules & Guidelines • Manual of Style • Articles in Need! • Request for Adminship • Admins 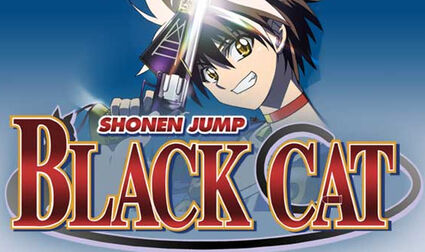 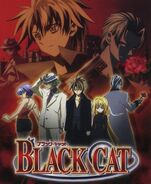 "Completing every job with ruthless accuracy, Train Heartnet is an infamous assassin with no regard for human life. Donning the moniker "Black Cat" in the underground world, the elite killer works for the powerful secret organization known only as Chronos.

One gloomy night, the blasé gunman stumbles upon Saya Minatsuki, an enigmatic bounty hunter, and soon develops an odd friendship with her. Influenced by Saya's positive outlook on life, Train begins to rethink his life. Deciding to abandon his role as the Black Cat, he instead opts to head down a virtuous path as an honest bounty hunter. However, Chronos—and particularly Creed Diskenth, Train's possessive underling—is not impressed with Train's sudden change of heart and vows to resort to extreme measures in order to bring back the emissary of bad luck.

This assassin turned "stray cat" can only wander so far before the deafening sound of gunfire rings out."

Black Cat was originally a Japanese Shonen Jump manga series written by Kentaro Yabuki. The series was adapted into a twenty-four episode anime series by Gonzo studio. It debuted in Japan on the anime satellite television network Animax and the terrestrial Tokyo Broadcasting System network on October 6, 2005.

Viz Media licensed the manga series for English-language publication in North America and as of May 2009, have released all 20 volumes of the series. Funimation Entertainment licensed the anime series for North American broadcast where it was broadcast on the Funimation Channel. The series was later released on six DVD compilations, as well as a Complete Series boxed set.

Sven follows a strict code of chivalry; he is always respectful to women and children (though dangerous women do not seem to apply) and acts very proper. He is often tortured by Train Heartnet's capricious personality and is usually dragged into trouble and even more debt because of it. Throughout the series, he tends to get severely wounded but never backs down from his task or his code.