Apostles of the Stars

The Apostles of the Star (星の使徒 Hoshi no Shito) is an organization created by Creed Diskenth to rid the world of Chronos. They have mastered the mysterious power of Tao, granting them incredible power. Creed later fuses this power with nanomachines in order to become immortal. The Apostles of the Star also control their own private army know as the Shooting Star Unit. They also have a group of elite soldiers known as the The Kiseitai.

Creed attracts several powerful individuals to the Apostles of the Star in order to start a global revolution. The organization's initial aim is to destroy Chronos so that the world may be freed from its influence. The Apostles' first target is the world summit conference in San Geles City: an annual meeting in which leaders meet to discuss the maintenance of international relations and world peace. Chronos regularly sends representatives there and at this meeting it has seven officials speaking for the society. Creed believes this is the perfect opportunity to start the revolution. Chronos catches on to the plan early and warns its officials about it; however, the representatives are quite unconcerned because they have already ramped up security.

The extra security measures are useless as various members of the Apostles neatly dispose of the exterior guards and cause a ruckus. Creed and Doctor sneak into the building of the meeting and kill all twenty attendants. It is essentially a declaration of war against Chronos. They start to destroy several of Chronos' locations and affiliate associations.

However, as time goes on, Creed's priorities begin to change. He becomes less focused on destroying Chronos and more obsessed with getting Train Heartnet's attention. The leader is angered by Durham's assault on Train and his friends and kills him for interfering with the ex-assassin. Charden is highly disturbed by this and worries that Creed is losing sight of the Apostles' true objective. Eventually he abandons the organization in disappointment after realizing how unstable Creed has become. Kyoko has also left the organization only because she tends to follow Charden and she has a crush on Train.

Creed's castle is attacked by Chronos' special assassination squad Cerberus. The Apostles manage to escape from the castle explosion after a lengthy fight with the Time Guardians. They later take up refuge on an island in Adonia Sea. They are later attacked by both Chronos and the Sweepers. Shiki, Doctor, Maro, Eathes, and Leon are all soundly defeated by their assailants. Eathes is forced to lead Train and his friends to Creed's lair, where he has efficiently beaten Sephiria Arks. After an intense battle with Train, Creed is defeated and stripped of the powers he gained from nanotechnology. The Apostles of the Star are no more and its remaining members go their separate ways, except for Echidna and Creed.

Several members of the Apostles 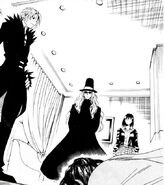 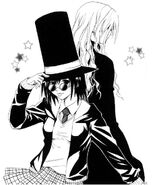 Apostles of the Star

Apostles of the Star